We aim at promoting youthful talents that will:

“If it’s not good then it’s not released” 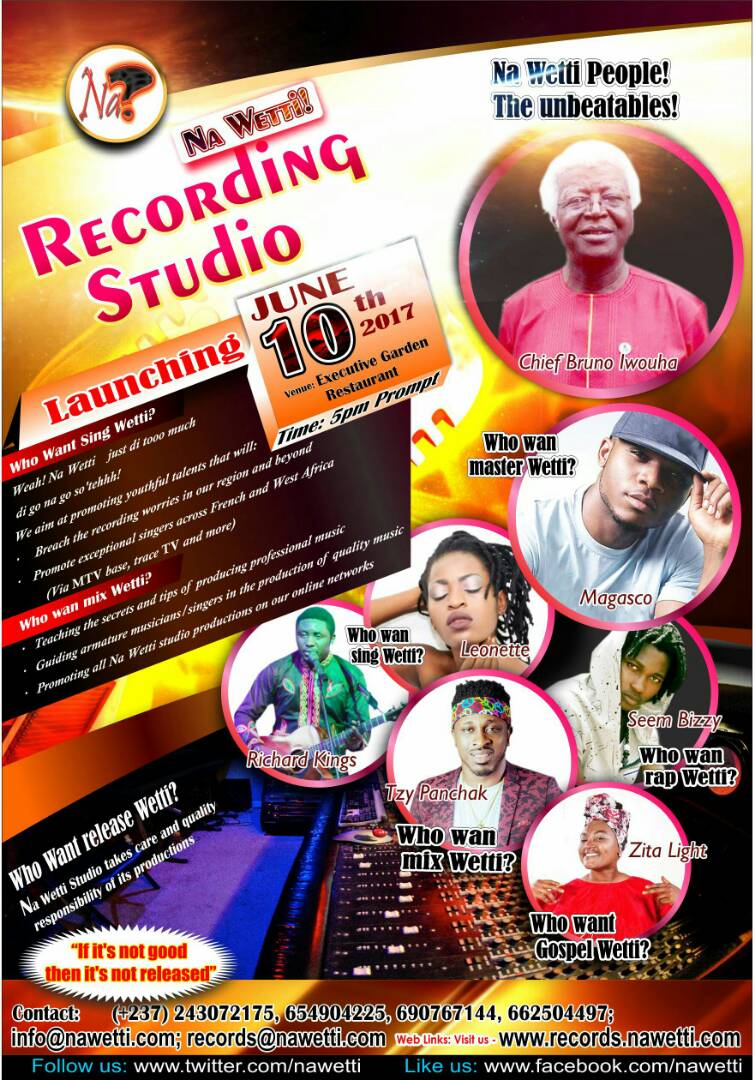 Visit Our Gallery for More

Tagged as Na Wetti Recording Studio Launch, on Saturday the 10th of June 2017 at Executive Garden Restaurant commercial avenue Bamenda, the opportunity to present a new dynamic and community social support music production house was officially presented to the public. After about 6 weeks of community awareness through audiovisual media platforms including local radios and TV stations, and also through online social medial networking sites, the immediate population of Bamenda was sensitizied on launching date. Both international and national icons came to Bamenda to launch the first steps of the industrious and community blessing initiative of Na Wetti Record Label.

Practically, the event launching was a double phased objective achievement. In one part, the recording studio was presented and in the other, the Na Wetti Fashion Initiative came to light with the tag “Looking Good and Blessing an Orphan”.

For over 5 hour’s of activities, the Record Label launch demonstrated its aim of promoting youthful talents as follows:

The Recording studio, presented by the Master of Ceremony and indicated on the publicity flyers, outlined that Na Wetti Studio takes care and quality responsibility of its productions with its motto: “If it’s not good then it’s not released” .

With a seated audience of over 300 persons including orphans, invited authorities, TV and radio reporters and the entertaining artists, the occasion was initially graced with a fashion parade and ballet presentations by the Good Shepherd and MISSPA orphanages. Through the Na Wetti fashion designs showcase phases there was also a series of interlude musical presentations by invited artists including Richard Kings, Tzy Panchak, Seem Bizzy, Zita Light and Leonette. There was also an overhead video presentation of the Na Wetti Records’ web portal by the Na Wetti web development team leader, and a humanitarian encouragement video to convince the audience on the human progress need in supporting vulnerable persons.